Just shove him out in front of the policeman's gun! 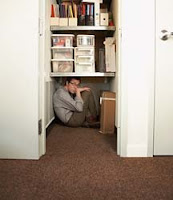 A woman was alone in her home in West Jordan, Utah, when someone knocked on the door. She was working and ignored it. A moment later a downstairs window smashed and three burglars climbed through.

Terrified, she grabbed a cordless phone, hid in an upstairs closet, and called police.

"One of the burglars came into the room I was in," said the 21-year-old victim, who didn't want to be identified. "Nothing was going through my mind except, 'Please don't look and find me'."

That's when the burglar decided to look for valuables in the closet. He even brushed across her boots and legs, but didn't look up; he would have seen her face. When police arrived, all three took refuge in the room, and one decided to hide in the same closet she was in.

"He didn't even realize I was standing there. He was smashing me up against the wall," she said. When police entered the room she burst out of the closet, yelling "He's in here! He's in here!" -- surprising the burglar even more than the officers.

All three men were captured; they were armed with knives.