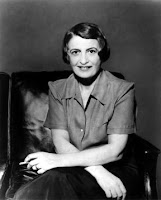 Most of you know that I'm a huge Ayn Rand fan and believe its critical for entrepreneurs to read. I've noticed that a large percentage (70%+) of successful entrepreneurs have read her. So I asked my friend over dinner if he had read her, and naturally he had, when he was in highschool. And I was shocked to hear that while he liked her a lot in the past, he now views her material as toxic.

He suggested that it's the kind of material that puts a target on your back if you're successful, and would create an unpleasant world if everyone studied her.

His point was that successful entrepreneurs will be successful anyway, and are just naturally attracted to Ayn Rand but would be better off without it and don't need it.
Posted by Wayne Mansfield at 12:01 pm