Australia’s foreign affairs minister,Peeny Wong, has raised human rights, detained citizens and “trade blockages” in talks with her Chinese counterpart in Beijing on the 50th anniversary of diplomatic relations between the two countries.

Wong, the first Australian minister to visit China in three years, brought up the sensitive issues while declaring that small and medium-sized countries in the region wanted China and the US to responsibly manage their tensions.

She met with China’s foreign minister and state councillor, Wang Yi, in Beijing on Wednesday. They agreed to begin or resume dialogue in a range of areas, including trade and economic issues, consular affairs, climate change, defence, and regional and international issues.

“When we last spoke, state councillor, you said a sound Australia-China relationship is not in contradiction with safeguarding national interests. I agree,” Wong said.

“We can grow our bilateral relationship and uphold both of our national interests if both countries navigate our differences wisely.

“With that in mind, today I would like to discuss in the course of this meeting several issues of importance for Australia, which include consular matters, trade blockages, human rights and the global rules and the norms that underpin our security and our prosperity.” 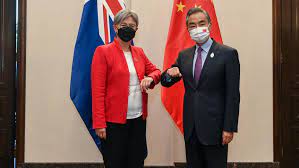 The trade blockages refer to Beijing’s tariffs, bans and other restrictions on a range of Australian exports, including wine and barley, which were rolled out at the height of the diplomatic rift in 2020.

Posted by Wayne Mansfield at 1:17 pm