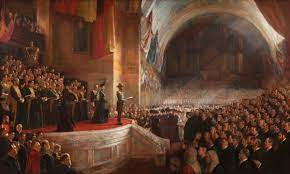 Canberrans, heading towards 99 per cent vaccination, remain locked away from the state of NSW, which surrounds the
ACT Chief Minister Andrew Barr declared this week he had no idea when Canberrans might be able to travel to Sydney or the coast. He added the acid sting that “it may be that NSW decides to drop that to one of their newsletters, The Australian or the Financial Review, overnight, and we’ll read about it in the morning”.m.
Queensland and Western Australia remain haughtily aloof, their leaders declaring their people are perfectly content to keep out interlopers, thank you, and any outsiders thinking of running the border should expect huge fines or imprisonment.
Both seem strangely content that their constituents, lulled into a sense of security, remain among the least vaccinated in the nation. Those in Queensland, of course, were scared witless about AstraZeneca by their state’s own chief health officer.
Both states, it happens, are accustomed to pursuing with full prejudice those considered to be outsiders, even if they live within state borders.
Some years ago Queensland declared war on motorcycle clubs with its modestly named Vicious Lawless Association Disestablishment Act (VLAD).
Todays #Hashtags.

Posted by Wayne Mansfield at 6:12 pm