7 Secrets of the the Top 1% of the Billionaires on Forbes. 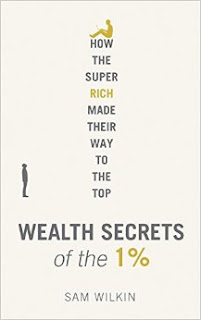 Apparently becoming a Billionaire is easier if you live in an emerging economy - read India, Russia, China, Mexico... so says author Sam Wilkin in his great expose book "Wealth Secrets of the 1%"

He goes back to ancient times of Greeks and Romans, through to Silicon Valley mega rich like Gates and Zuckerberg and identifies at least 7 Secrets that helped these titans of wealth get the way.

The book is sometimes hard going but worth the effort if you want to get seriously rich or succeed in business. I wish I had read it 40 years ago when I was starting out... instead I read Napoleon Hill's classic Think and Grow Rich on November 11th, 1975. That lead me to a life of positive thinking and masterminds... and I did reasonably well but not on a scale of the "1%'ers"

So I have taken notes and here are Wilkin's 7 Secrets... [ he identifies more Secrets but these 7 recur most in his research.

3. The Worst Place to do business is REALLY the BEst

4. When Lenders can't lose, YOU WIN

7. To Succeed, NETWORK< NETWORK, NETWORK
Posted by Wayne Mansfield at 4:24 am