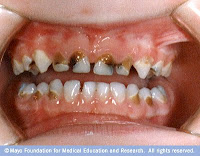 The second volume of ‘The Veritas’ magazine arrived in our office today, so I read through it to see what article caught my attention.

I found a story on fluoridated water that I found very informative but a bit of a shock.
Water fluoridation is the controlled addition of fluoride to a public water supply to reduce tooth decay.

I would be happy with a false set of teeth and a high IQ level!!

“Who in their right minds would risk lowering their child’s intelligence in order to reduce a small amount of tooth decay, for which the evidence is very weak?” says Tara Blank, Ph.D., Science and Health Officer of FAN.

Once a child is intellectually harmed, there is no turning back.
What do you think?
Posted by Wayne Mansfield at 2:04 pm