Here's an answer to Junk Mail 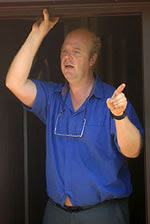 Postman Roger Annies hated delivering junk mail, so he told the people in his route how to opt out - his bosses at the Royal Mail (who made millions of pounds a year from junk mails), however, were not amused and sacked the 10-year veteran!

Mr Annies decided to act after receiving dozens of complaints from householders who were fed up with the piles of junk mail dropping through their letter boxes everyday.

So, hoping he may have the answer to their prayers, he delivered his own leaflet to residents in Barry, South Wales, explaining how they could opt out of getting mailshots known as ‘door-to-door’ items by filling out a form. …

Within days his local sorting office was inundated with at least 70 completed forms demanding an end to junk mail. Curious, his bosses decided to make a few inquiries and discovered the leaflet produced by Mr Annies. He was then suspended on full pay pending an investigation into alleged misconduct.
Posted by Wayne Mansfield at 6:17 pm