Don't ask me to celebrate what I don't agree with! 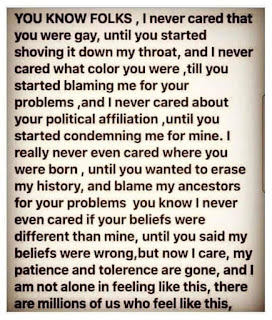 My go to response to confronting ideas has been " I don't mind what you do as long as I am OK"
That was my response to same sex marriage, the changing od my mothers funeral plot, etc,,,,
It conveniently got changed by those selectively hearing to "wayne doesn't mind" and that surely was the case until two great events of 2019/2020.
I was asked to a same sex wedding - I was asked to celebrate something I personaLLY DIDN'T LIKE. And I had to make a choice that those close to me don't understand.
the next occasion was the passing o my brother - it was proposed that my mother be shifted so my brother could be interned in her place allowing for the sister-in -law to be added later... it was represented that "wayne doesn'r cre what is done" but my sistern did... to an extent that she was "univited" to the funeral.
Now I was reminded of this by the post to Facebook by my brother -in-law Sebastion [Bob] Cocivera, who I have to say, is more forthright than me. I will post his picture that stirred me up. #WatneMansfield,#PowerRead,#EperienceOracle,#Done,#Rebootology
Posted by Wayne Mansfield at 8:05 am