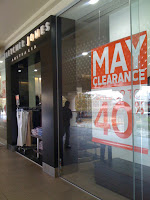 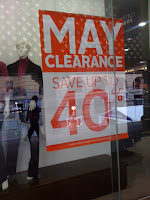 I like Fletcher Jones to buy reasonably priced men's clothes. And I was really clean to go into the Perth city store after receiving an invite from the Frequent Shopper Email that I get from FJ's...

Everywhere the banners blared "May Clearance 40%" with some very tint type... on selected lines.

On entering the store, I noticed many tables had the "40% OFF May Clearance Sign" whilst others didn't. And this is what gets my goat... I selected a shirt from one of those clearly marked tables with a RRP of $89.95 and expected the price to be reduced by 40$ or roughly $36. Silly me... only "some" of the items on the table were "for clearance" and if I read the "really fine print" I would realise that what I had carefully chosen wasn't on special...

I shared my angst with the shop assistant and he said "I agree with you but this is retail and that's how we are told to display the goods". I protested and he replied "Don't blame me, I just work here."

I told him that I though it was dishonest and I wasn't paying full price for the and left the store, but not before I suggested I would complain to the "powers" that handle these things to which he helpfully suggested: "If more people complain maybe they will stop doing this sort of thing..."

Pigs might fly.
Posted by Wayne Mansfield at 4:10 pm