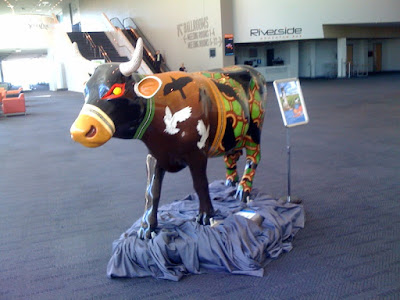 There were some great examples of how social media works into the overall media mix for big companies and how best to capture the 15 to 19 year olds who only know the world of "instant on."

I found the show disappointing in that it was more show than substance... and used US examples rather than successful Aussie ones.. with the exception of Nic Hodge , Digital Creative Director of Clemenger BBDO who to a workman like job on the MBF Mr Invincible campaign.
I as very disappointed with the figures quoted for the take up of Social Media with figures for Facebook and Twitter being very out of date - both figures quoted were 25% less than currently available figures following Twitter's Chirp love in last week... gee how hard is it to change a powerpoint??
So, for all that expense, what do you think the audience learnt?? Not a lot when the big end of town is relying on this level of support from people like Marketforce.

What I was impressed by was Nic Hodges being receptive to feedback - answering my Twitter critique and agreeing to "suffer me" for breakfast tomorrow. I will give you an update on that [I did notice he had an iPad so I don't think I will be eating much...]

[Would have some photo's of FreshDigital for you but the iphone didn't handle the light well at the presentation - it needs a flash Steve! So, I have a photo of the ceramic cow in the lobby of the Perth Convention Centre]

Posted by Wayne Mansfield at 11:42 pm