Here are some REAL time management techniques to consider 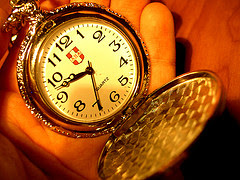 The other day I sent you a list of flippant time management techniques - hopefully you had a chuckle from them. Well, this morning I received an email from Donald Wetmore with 5 great ideas about achieving more that I just have to share with you. So, here are those ideas courtesy of Dr. Donald E. Wetmore of The Productivity Institute, Stratford, USA

Huge increases in your success do not always require huge increases in effort. In a horse race, the first place horse might earn $50,000 while the second-place horse might earn $25,000. The first horse got twice the money not because it ran twice as fast as the competition. It only had to be a nose ahead. Here are some good examples you can schedule into your day. Small changes for big results.

2. Learn a new word each day. It's easy to do. Buy a pocket dictionary and keep it with you. Take a minute or two each day to look up a new word. Use that new word several times in your day and it will be added to your vocabulary. Over the years you will increase your vocabulary with thousands of new words. Just a few minutes a day. Small change for big results.

3. Set out your clothes the night before. Now this won't take anymore time because you've got to select your clothes sooner or later. This just gets it done sooner. And the benefit? You start your next day with a little less hassle and stress.

4. Grocery shop for two weeks at a time instead of weekly. Many perishable items like milk and bread may have to be replenished more frequently. But the non-perishable items, the paper goods and canned goods, can be purchased for a two-week period. It probably doesn't require more time to load four cans of corn into your grocery cart than two and you cut your grocery shopping time in half.

5. Do a daily random act of kindness. Go out of your way to compliment someone on good service. Send a congratulatory note when someone you know achieves a success such as landing a job or getting a promotion. Be genuine and sincere. No phoney baloney.

Everyone loves to hear the compliments. (I don't know anyone who is suffering from complimentary overload.) Now the real reward is in the simple joy of giving away the compliment and seeing the reaction but, in addition, another rule of life kicks in the give a spin-off benefit to you. 'What goes around, comes around."

Over the next year, you send out 365 compliments, pats on the back, and encouraging notes, you'll start to get some of those compliments and good wishes directed back at you. Over time, you create an entire support system, a flow of support for you and it just takes a couple if minutes a day. A small change for big results
Posted by editor at 10:48 am