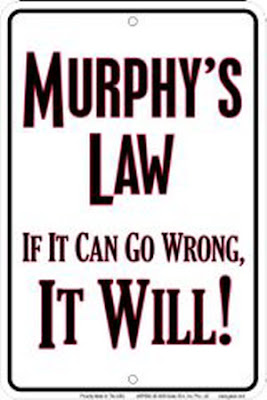 Murphy's First Law: Nothing is as easy as it looks Murphy's

Second Law: Everything takes longer than you think

Murphy's Third Law: In any field of endeavor, anything that can go wrong will go wrong.

Murphy's Fourth Law: If there is a possibility that several things can go wrong, then the one that will cause the greatest damage will be the one to go wrong

Murphy's Fifth Law: If anything absolutely can NOT go wrong, it will anyway.

Murphy's Sixth Law: If you perceive that there are four possible ways in which a procedure can go wrong and circumvent these, then a fifth way, unprepared for, will promptly develop.

Murphy's Seventh Law: Left to themselves, things tend to go from bad to worse Murphy's

Eighth Law: If everything seems to be going well, you have obviously overlooked something.