Staff or Customers - Who is Important?? 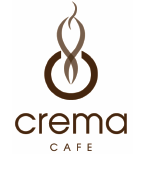 Friday lunch has been a weekly ritual for the staff at my office for nearly 15 years... we haven't missed a Friday lunch date in 14 years [give or take a year]. This Friday [Oct 23 2009] we chose to go to CremaCafe in West Perth. 4 previous visits had been great... and we needed to eat quickly and be back at the office for 1.30pm.
Matt ordered "roast duck salad radicchio, witlof, tomatoes, spanish onion, hazelnuts, yoghurt & honey dressing for $28.50" as he is on a health kick and fancied some duck. Tahya loves fish and chips so chose that from the menu "fish & chips beer battered, garlic aioli, green salad, for $28.50". My choice was "local calamari shallow fried, leaf salad, french fries, garlic aioli for $28.50"

Matt asked for his duck salad without the "yoghurt & honey dressing", Tahya was happy with the menu selection and I asked for my squid to come without the "garlic aioli".

We grab a Crema Plate as starters and enjoyed the "buzz" of West Perth.

Between ordering and service we witnessed the waiter drop a wine glass that shattered across the floor in the reception space... and customers were guided to tables whilst someone worked out who's job it was to sweep up the glass... but never mind, people could be careful and not "cut their feet?"

Service was quick and friendly and the mains arrived... however, Matt counted just 4 pieces of duck and lots of salad... and Tahya wasn't making too much progress on the fish and chips as they were VERY OILY and overcooked. My meal was OK and the garlic aioli was replaced with tomato sauce which actually added to the squid dish.


When the obligatory question was asked by our server... "How was everything??" I answered... "you know we come regularly and never complain... but we have a few comments about the meal today."

So Matthew said he believed there wasn't much duck in the "duck"salad, and I prompted Tahya to explain why she hadn't eaten more than 3 mouthfuls of her Fish and Chips...


Our server listened intently and took the meal plates away and discussed them with the proprietor and the chef.


She returned and this is what transpired:

"The chef says that the duck salad would have been more substantial with the "yoghurt and honey dressing" but we will take the charge off your bill." She looked at Tahya who is just 17 and in her first job out of school and said: "The chef looked at your fish and it is OK"


Now, my take on that is... duck salad doesn't need much duck just lots of yoghurt... and someone just 17 has no idea what fish and chips should taste like... apart from the fact Tahya had enjoyed her fish and chips at Crema on the previous 4 visits and had described her meal on those occasions as AWESOME...


Well I settled the bill and said to Lena who IS THE OWNER OF CREMA, "maybe you should review how a genuine complaint from a regular customer is handled as I thought that our concerns were dismissed without any acknowledgement that maybe we had a valid point to make."

Her reply was extraordinary... "I believe the duck salad would have been more substantial with the Yogurt dressing and I checked the fish with the chef and I agree with him it was OK. After all, I have to support my staff..."


My leaving leaving comment was; "Lena, I think you have your priorities wrong... without returning customers you can support your staff as much as you like but you will have nobody to server... you have dismissed the concerns of two of your regular clients as unimportant.."

And I guess Crema Cafe will not be on our lists of regular lunch venues for a while into the future...
Posted by Wayne Mansfield at 5:45 pm