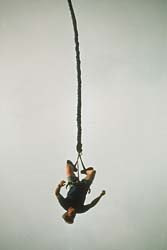 Bungee jump master Carl Dionisio, 37, had a great idea for a specialized bungee jump: he'd make his bungee ropes out of condoms.

It took four months to make the rope. "It was difficult as the condoms are slippery," said Dionisio, of Durban, South Africa. "When we tied knots they would just slip out." Still, he said, "latex is latex" and, after four months and 18,500 rubbers, he was "99 percent sure that it would work." Luckily, it did.

The only problem: it could only be used once.

Source: South Africa Independent
Posted by Wayne Mansfield at 6:36 am