We'll have a new one! 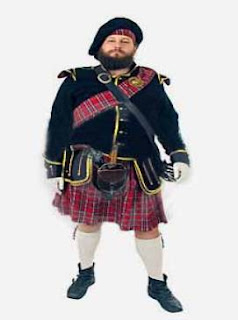 A Scottish Soldier, in full dress uniform, marches into a pharmacy. Very carefully he opens his sporran and pulls out a neatly folded cotton bandana, unfolds it to reveal a smaller silk square handkerchief, which he also unfolds - to reveal a condom.


The Scot painstakingly folds the condom into the silk square handkerchief and the cotton bandana, replaces it carefully in his sporran, and marches out of the door, shoulders back and kilt swinging.


A moment or two later the chemist hears a great shout go up outside, followed by an even greater shout. The Scottish soldier marches back into the chemists and addresses the proprietor, this time with a grin on his face.


"The regiment has taken a vote," he says.

The wit and humour of Peter Morley
Posted by Wayne Mansfield at 3:03 pm