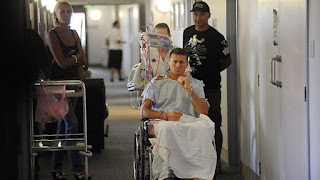 Sometimes I wonder about the Aussie press... I think I mentioned it yesterday too.

Yesterday the CBD of Brisbane was flooded as the river continued to rise... and chances are than 8000 homes and businesses will be underwater by Thursday as high tides and flood peaks collide... and the official death toll is 10 from Monday and 52 are still missing.

And the lead sports story - full page back cover [the most read page of our West Australian Newspaper!!] is Danny Green may never fight again!! This is about the same bully who couldn't get the nurse at Busselton Hospital to give him morphine before she had a Doctor check him... the same boffune who caused such a distubance the police were called... and we give the likes of him full page coverage!!

I say, "Come on, fairs fair, to the editors of The West Australian - stop giving these idiots oxygen for their stupid utterances about themselves and boxing... a brutal "sport" at best."

Am I on the wrong track>> Is it me who is delusional?? I hope not but let me know.
Posted by Wayne Mansfield at 6:06 am