The Desert Mums – Update May 20th 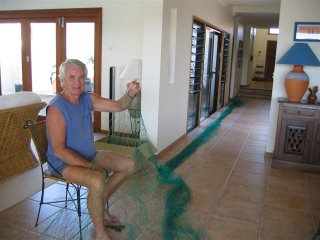 Day 17... on the road... resting... signing autographs?... The Mums report having had a very busy day today. They have been re-grouping, re-organizing, planning the balloon launch tomorrow and also preparing for the final walk into Birdsville on Monday morning. It must be so hard to be this close to the end of such a big journey, and still have such a lot to do and still more kilometres to walk.

Birdsville is abuzz with talk of the four crazy women who have walked across a desert – a desert which most find tough to drive across in their air-conditioned four wheel drive vehicles with windows firmly sealed against the dust, heat and flies.

The Mums have had a constant stream of visitors driving out from Birdsville to see them, talk to them, congratulate them - as well as those who have travelled from the west and spotted their footsteps in the sand for the last 392 kilometres.

The two days of reprieve have given the Mums a chance to gather their resolve once again (not that they lost it), and they are now very much looking forward to reuniting with loved ones. No doubt, those thoughts are foremost in their minds. But first, there is the big event – the launch of 2500 balloons at about 10am tomorrow morning. There was little time for any sort of information from the Mums tonight, as I gathered Denis was pushing for some assistance with the organization of tomorrow’s event – getting the troops into order would be a priority. Contraband was probably ‘BANNED”.

The balloon launch is a mammoth task. The idea was born towards the end of last year during the preparation for this walk. While the image of hundreds of pink balloons rising into the sky (one balloon each in memory of the women who lose their lives every year in Australia to breast cancer), the actual deploying of such an event was a bit of a puzzle. Den nutted it out and came up with the idea of huge nets to hold the inflated balloons until blast off! What type to get ……where to get the stuff…… how to put it together……? He ended up with huge lengths of nylon netting that had to be hand sewn into two giant tubes fastened at each end, with a hole through which each balloon was pushed once inflated. Well, the proof will be in the pudding tomorrow morning! We worked on these nets together for a couple of days and they stretched from one end of our home to the other – Den stitched as I fed the copious maze of nylon into his hands – naturally we went off course at one stage and ended up with everything awry – my fault (naturally – I’m a wife…..need I say more?). Anyway, the finished product was perfect!! Photo attached.

Today was quite windy, which was something Denis hoped not to have for the launch. Thousands of balloons all contained together would provide a huge resistance against the wind, so fingers crossed that the morning is relatively still. Sunrise will no doubt see all hands on deck inflating balloons from the helium gas cylinders and hand tying them so as not to leave anything behind to degrade the landscape – the four Mums, the three support crew and Ed and Janice who are also there to lend a hand, will be taking turns with the tying. What a sight it will be – I would so love to see it – hundreds and hundreds of balloons rising skywards in celebration of the lives of those who are no longer with us.

No doubt, the Desert Mums will have an audience tomorrow morning - both the townspeople from Birdsville and the tourists who are lucky enough to be around at this time would not wish to miss something like this. I hope someone is taking the donation box around!

But we have to wait for their report…………until tomorrow, good night from The Desert Mums
Posted by Wayne Mansfield at 11:22 am